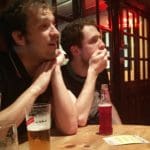 Great to be back at Little Johnny Russel’s earlier this week! Pretty much always a good laugh playing there. It’s one of those pubs that even on a relatively quiet night, there’s still actually quite a few people about. There’s music on at least two nights a week so people head out if they want to catch some tunes. 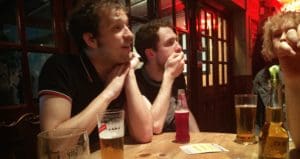 Just thought Id put this in to show, yet again, how ridiculously similar these guys look. Get your own faces!

Also it was Hallett’s birthday so of course good to get out for a couple of beers. We had actually all been a little bit nervous about just how many bewskis Hallett had already had during the day. Based on the quality of his typing in some messages to our ongoing Facebook group chat, we had grounds to be concerned.

I think it’s safe to say that we were all quite happy with how the gig went. As we’ve recently been in the studio recording, a lot of practice time had been given to that instead. Plus, John has been on yet another holiday! I mean, he said it was a “school trip” (he’s a music teacher).

You say “school trip” I hear “free holiday”. Am I right?

Anyway, the point is we haven’t had much practice time recently, so could have gone badly!

Part way through the gig someone shouted and asked if our next song had any singing. You can see why they thought it might. 40mins of uninterrupted purely instrumental music streams “this next one has vocals!“.

As it happens Hallett then made the public suggestion that we might play The Fresh Prince of Bel Air, a suggestion that seemed to be well received. We were also then presented with a few volunteers to come and have a go. The first lady that came up gave it a great shot, but on realising she didn’t know the words had to bow out early.

Quickly replaced by our man Jack of Al Burrito / Blackfoot Circle who totally nailed it. He did say afterwards that he wanted to volunteer for the task when we played at the Pyramids earlier this year but had forgotten the words. But, recently having watched a spate of Fresh Prince on Netflix was ready to jump back in.

Skip to 40mins into the set video to check it out!

Got a few more gigs coming up in the next couple of weeks, so head over to our gig listings page to check it out and we’ll see you there!