It was back in 2001 when I first found myself queuing up outside the pyramid centre in Portsmouth. With my sister Vivica and brother-in-law Guy. We were there to see a band called disturbed. So as you can tell I was a young teenager heavy metal fan but this was the first proper gigs I had ever been to.

Ridiculously excited we got inside got a couple of drinks just the head of the support band starting playing.

I remember the band was called One Pity. I remember that they were really great. But strangely I never managed to find any information about them since then. So, I have always wondered if they have carried on after that time.

Me marking the occasion where I was heading in to The Pyramids as a performer for the first time!

I remember when the music first kicked off even during One Pity’s set. The crowd was pretty insane. I saw for the first time ever crowd surfing and I knew immediately that I was going to love doing that. Disturbed themselves were also awesome. This was back when they’re only had their first album, I think. Potentially their second, I just remember it being such an amazing night.

This occasion was to be not only my first ever proper gigs and I’ve been to but also the first of many that I would go to throughout my teenage years and later at the Pyramid Centre. For those of you who have never been there before it is a fairly large venue, easily the biggest in Portsmouth. Over the following years I saw other awesome bands there mostly heavy metal, including Sepultura, Soulfly, Mastodon, Cky, Million Dead, to name but a few.

I also remember after seeing soulfly for the first time at the pyramid centre waiting behind backstage with my mate Deegan to try and meet Max Cavalera. Although we didn’t manage to catch him as he had left to go to see his family immediately after the show, we did have a good laugh chatting to the drummer and guitarist from the band who were any too pleased to be hanging around after the show chatting to fans.

Seeing so many of my favourite bands at the Pyramids has given it a special place in my memory, so you can only imagine how exceptionally excited I was to be offered a gig at the pyramid centre supporting the Rhythm of the 90s. Now clearly the Rhythm of the 90s aren’t a heavy metal but there again neither are the machete. But that didn’t matter, and the fact that we’ve been offered a slot where the audience with potentially love our music and have a great time dancing was massive. And aside from that, the opportunity to play at the pyramids felt like a massive Milestone not just for me but for the rest of the band you have similar memories of the venue.

When we were asked to play at the pyramids by promoter Nick Courtney he asked us a favour comma given that the headlining band of the night with Rhythm of the 90s he asked could we, the machete, learn a couple of classic dance songs to perform on the night? We took this challenge away initially thinking that it would be easy to convert a couple of clasic dance tunes into songs that you might hear by the machete. But it turned out, after thousands and thousands of messages in the machetes Facebook group chat, we were struggling to find songs that would work well for us. The main reason for this, I think, is that as an instrumental band covering dance music there probably isn’t enough variation for us to make an interesting track and we probably didn’t have enough time to rearrange an into a song. 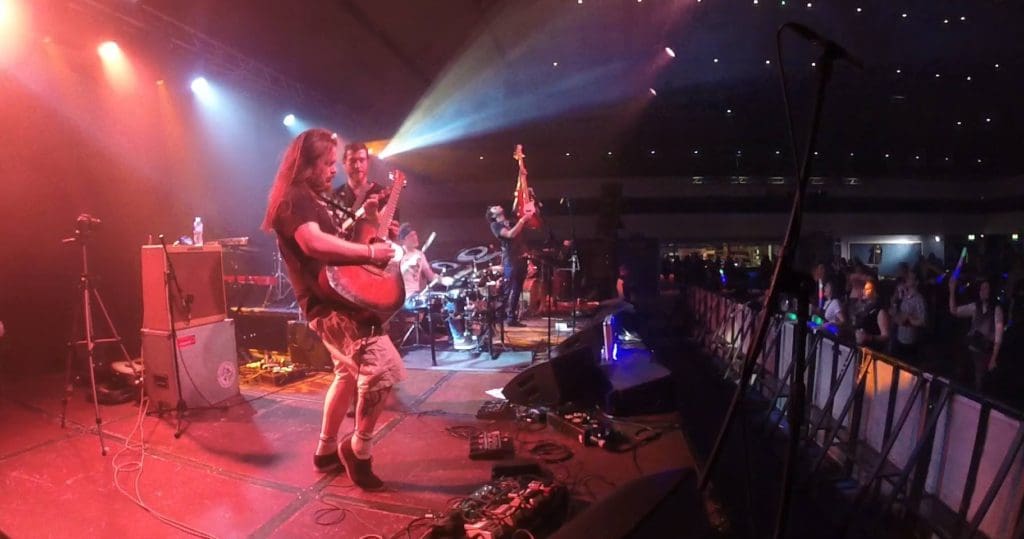 Totally smashing it on stage at The Pyramids

So, in the end we came up with a slightly different arrangement and put together a number of short interludes. We covered various songs from the 90s. Not only dance music, and spliced them into our set! We ended up choosing Eifel 65 by Blue, Breathe by The Prodigy, The Real Slim Shady by Eminem and none other than the theme song from Fresh Prince of Bel Air! All of which were great fun and went down really well!

Was it all we’d hoped?

Now, the experience of the gig was fantastic. We loaded in through the lifts at the back, our own dressing room (well, shared with DJ Lemon), proper full soundcheck (all the sound guys and crew at the Pyramids were really awesome) and played the show as we do best.

As it happened, there were a fair few less people in the crowd for our set while we played than we’d hoped for. But, we were playing early in the evening and were just happy to be there. A massive shout out to all our friends who made a special effort to come out and have a dance to support us.

Also, shout out and thanks to all the guys from Blackfoot Circle and Rhythm of the 90s who were all super nice, and of course Nick for putting us on! Cheers!