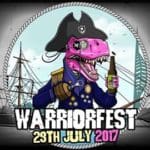 WarriorFest 2017.  July 29th the dudes at Staggeringly Good brewery are hosting a party on board HMS Warrior in Portsmouth. Beer, dinosaurs and….pirates! The perfect combo for a Saturday evening.

I first met Joe and the gang through the beer shop I manage, the Southwick Brewhouse, they came in with some beer samples for me. So I instantly liked them.
Back then they had just started up, brewing in small batches at the Brewhouse & Kitchen (Guildhall Walk).  The beer was epic and the labels more so, people riding Dinosaurs and drinking beer, whats not to love?!

I started selling their beer in my shop and people were loving it! Now the guys have expanded and have their own brewery, and I’m happy to report that, like the beer, the dinosaur puns are only getting better!

Being partial to a beer or 2 myself I was excited to see some of the best breweries in the UK will be there:  Vibrant Forest Brewery, Arbor Ales, The Southsea Brewing Company, Wild Beer Co. Good Chemistry Brewing, Weird Beard Brew Co., Siren Craft Brew, Brighton Bier and Downlands Brewery.
I highly recommend ” Business Casual” by Good Chemistry, and “Kaleidoscope” by Vibrant Forest.

So there you have it, live music, food, a shit load of beer, one massive historic venue, plus I hear the Bossard String Quartet will be performing a piece of music from a film about dinosaurs… can’t think what though? Ghostbusters?